Rubber gloves, as the name implies, are gloves made of various types of rubbers, either in a combination with other materials, such as textiles, plastics, or only rubber. They cover a wide range of applications, ranging from medical gloves to utility gloves for almost any kind of work.

This type of gloves can be supported, meaning they have a rubber coating under a textile or knit underlying layer, or unsupported, meaning they are made of rubber only. The most common application for rubber gloves is chemical protection while working with dangerous substances such as oils, acids or hazardous solvents. They can also be worn during dishwashing, as they can protect the skin and hands from the detergent. Rubber gloves can also be used while working in care center when treating young children or older people, specifically when dealing with fecal matter or urine.

Rubber gloves were first used in 1889 at John Hopkins Hospital, where William Stewart Halsted, the chief surgeon of the hospital, developed them to protect the medical staff from catching dermatitis and other dermatological conditions from surgical gloves.

Since the 1960s, rubber gloves have been widely used around the house for various choirs, such as dishwashing, scrubbing the floor and other forms of cleaning. Gloves were available from the beginning in a numerous colors, shapes and designs, fit for any need, but some designs persisted and became popular. These are the yellow or pink long sleeved rubber gloves, perfect for washing dishes or clothes. Other popular designs were shoulder length gloves, used in meat packing facilities and slaughterhouses, or attached gloves for added protection, used by mechanics and factory workers.

To benefit from the advantages of rubber gloves, users must wear them as tight as possible, but still allow the hands to breathe, while also getting a higher degree of flexibility. Palms and fingers have usually a textured and raised area to help the grip and comfort. Gloves protect workers from powerful and dangerous detergents, acid fluids, as well as bacteria and other pathogens from reaching the skin while cleaning up after animals.

Rubber gloves are also widely used by professionals, especially by cleaners. The clever design, with long sleeves and thick rubber provide excellent protection during cleaning tasks and also water protection. Painters, plumbers and other construction workers sometime find rubber gloves particularly helpful on small construction works such as decorations or renovations. Dusting, polishing, rubbing and heavy lifting are some of the areas where rubber gloves come in handy.

Supported rubber gloves include an underlying layer of textile mesh, to add stability and long life to gloves. Generally, unsupported gloves tend to be more comfortable, because of smooth skin contact.

Rubber gloves are usually made of thick latex, which provides tensile strength, elasticity and comfort. However, due to the allergenic risks for certain individuals, other materials are common, such as isoprene, PVC or nitrile.

An important area of work where rubber gloves are a must is the food industry and restaurants. Recent laws, voted and adopted in many areas of the world, require that disposable gloves should be used when preparing food, washing dishes or other activity. Some laws specifically state that employees must wash hand before starting work, and put on a pair of single use gloves. Cheaper alternatives to latex gloves include PVC coated gloves, or nitrile gloves. Since the beginning, the use of rubber gloves was hampered by the difficulty to put them on. Various oils were used to help this difficult task, but only in 1947, a scientist used cornstarch to powder gloves. Rubber gloves today can be powdered to enable ease of use, or unpowdered, for a closer feel and comfort. It is estimated that 70% of rubber gloves are currently powder free in the USA.

A secondary, but important use for rubber gloves is in the criminal world. Criminals and perpetrators have long been known for using rubber gloves of various types and designs to cover their tracks. They are often chosen because of their thin, comfortable feel, as well as extreme flexibility. Unfortunately, the thinness of the gloves has its repercussions, as some criminals can be caught by what is known as glove prints. They are, in fact, the wearer’s prints transferred on a surface because of the thin layer of rubber of the gloves. 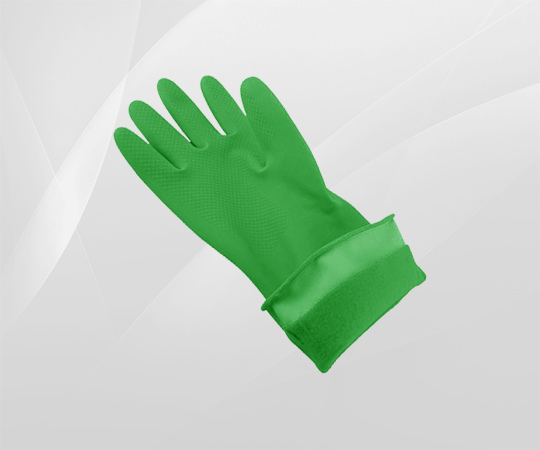